Immunotherapy is a treatment aimed at targeting and overcoming cancer through the immune system of the body.

There are two main types of immunity. “Adaptive immunity” which requires exposure to a specific target or antigen in order to attack (such as in vaccination strategies), and “innate immunity” which is a nonspecific mechanism to fight off any foreign, infected or abnormal cell. 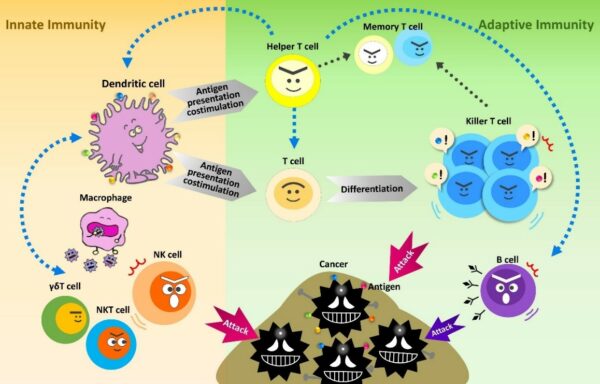 The immunotherapy we offer is a multivalent Dendritic Cell Vaccine that specifically attacks cancers through adaptive immunity. We combine this treatment with an activated Natural Killer cell therapy (or activated NK / NKT /γδT cell therapy) which uses the innate immune pathway. By targeting cancer cells through both pathways, maximal specific recognition of the cancer cells is ensured, without the destruction of healthy normal cells.

Tumors are not just a clone of a single cell type, but contain a diverse population of cancer cells. In order to attack the various types of cancer cells without tumor escape (evading the immune system), a treatment that uses both adaptive immunity and innate immunity to its advantage, is most ideal. Our hybrid therapy, combining our multivalent Dendritic Cell vaccine with the activated NK cell therapy has been considered a “secret weapon” in cancer vaccination strategies.

As the treatment uses the patient’s own immune system to specifically attack the cancer at the cellular level, there are minimal to no side effects. Treatment can be safely obtained while maintaining and improving the quality of life (QOL).

In our pursuit for a better cancer treatment – a safer, more effective treatment, free of side-effects – we arrived at a solution using the body’s own immune system. Since the year 2000, we have been steadily researching and developing technologies and have achieved excellent treatment results, attaining patents in various countries around the world.

In particular, in a series of groundbreaking technology patents related to the production of dendritic cell vaccines, we have been able to make strides to significantly reduce the burden on the patient’s body during the treatment. The multivalent dendritic cell vaccine we provide continues to be upgraded using patented platform technology.

Culture method for the activity and proliferation of lymphocytes 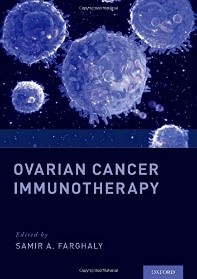 Ovarian Cancer Immunotherapy, Edited by Samir A. Farghaly, Oxford University Press, 2018
Chapter 9: Heat Shock Protein Vaccine Therapy for Ovarian Cancer
Hiroyuki Abe, Amane Sasada, Shigeki Tabata, and Minako Abe
“Ovarian Cancer Immunotherapy” was published on November 22, 2018 by the Oxford University Press, UK. Each chapter of this book is written by a team of prominent medical institutions from around the world and is written from an overview of basic science and clinical treatments of immunotherapy in ovarian cancer.

Our medical team was asked to contribute and write one of the chapters, entitled “Heat Shock Protein Vaccine Therapy for Ovarian Cancer”. As ovarian cancer often arises initially without overt symptoms, only about thirty percent are found in the early stages. In approximately seventy percent of cases, the ovarian cancer has already progressed to advanced stages by the time of diagnosis. While there has been some progress in the use of chemotherapy, advanced ovarian cancer remains difficult to treat, and the five-year mortality rate remains high. As new treatments are being explored, the use of immune cells and immunotherapy is considered to be among the rising stars of a promising new treatment. In our chapter, we are discuss our newly developed multivalent dendritic cell vaccine which incorporates heat shock proteins as a part of the therapeutic effect.

Three Benefits of Immunotherapy at the Tokyo Cancer Clinic

1. Treatment is possible, no matter what stage or what type of cancer

As each cellular treatment is created specifically for each individual, according to the characteristics of each patient’s cancer, it is possible to receive treatment regardless of the type or stage of cancer. 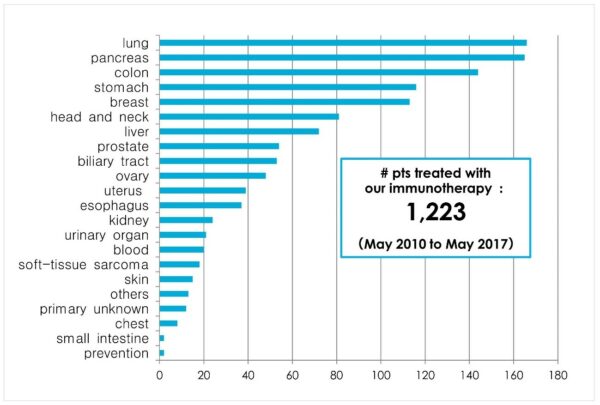 2. The double effect of both cancer reduction and increased long-term survival

Patients who have received our immunotherapy have been confirmed to have a reduction of their cancer and increased long-term survival. For example, when our multivalent dendritic cell cancer and activated NK cells were given to a patient with right sided lung cancer (metastasized from the left lung after radiation therapy), the cancer completely disappeared and tumor markers also normalized. Even in cases where standard treatments have failed, prolonged life expectancy and long term survival have been shown in colon cancer, lung cancer, pancreatic cancer, prostate cancer, breast cancer, and ovarian cancer.

(Fig. 3) When our multivalent dendritic cell vaccine was administered to 22 patients with advanced lung cancer who had failed standard treatment, about 68% responded to the vaccine with a long-term survival rate of more than 900 days. Even for those who did not respond adequately to the vaccine, the survival rate of more than 300 days was about 32%, confirming a life-prolonging effect.

3. Our immunotherapy can be used in combination with surgery, chemotherapy and radiation therapy.

Depending on the patient’s wishes and condition, immunotherapy can be used before, after, or concurrently with standard treatment. Our cellular immunotherapy not only enhances the strength of the immune system, but also has the effect of improving quality of life (QOL), and as such the side effects of chemotherapy and radiation therapy may be reduced. In addition, when performed after standard treatment, it can be used as an effective preventive measure against cancer metastasis and recurrence.

(Fig. 4) May 25, 2015: Abdominal CT after 1 round (kur) of treatment
1 round (kur) of multivalent dendritic cell vaccine and activated NK cells were administered while the patient continued chemotherapy after surgery. The mass is significantly smaller and blood test data have improved.
(Fig. 5) July 21, 2016: Abdomen CT after completion of all treatments
Three more rounds of chemotherapy were added. PET-CT showed a residual mass, but metabolic activity of cancer cells was not observed. Thereafter, the residual tumor was surgically removed, and the complete disappearance of the cancer was confirmed.